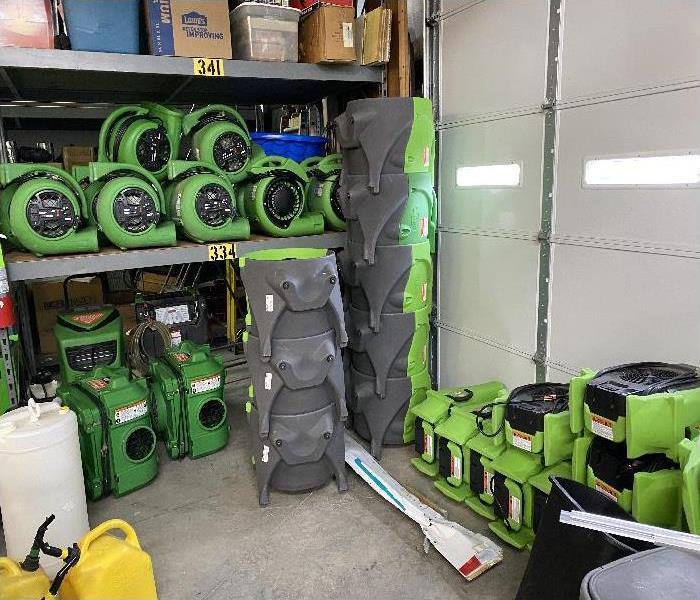 Call the experts at SERVPRO when your property is damaged!

Advance, NC, is a quaint little community of just over 1,300 people in Eastern Davie County. It is included in the Piedmont Triad area, which played an essential role in the Civil Rights Movement. Where the name Advance comes from is open to debate. Some think it came about when the area added a post office, hoping growth would ensue. Others claim the community was named after the first freed slave in the area, Samuel Vance Allen. But one thing everyone in the town has in common – they love the holidays, and Thanksgiving is a favorite.

The assembly agreed, and November 15, 1849, was declared the first Thanksgiving in North Carolina. While this was the initial official date, the folks of this state had been giving thanks since April of 1758. On June 7, 1758, Governor Arthur Dobbs declared a day of fasting. The people gave thanks to God for his preservation of the province.

Governor Dobbs also declared a day of public Thanksgiving on the first Wednesday in December. In 1759 he chose October 31st as a day for being thankful. It would be celebrated on different days for several years.  Other declarations included:

•    November 1777 – Governor Richard Caswell receives a petition from lawmakers for a day of thanksgiving. It was celebrated in New Bern on December 18, 1777.
•    November 26, 1784 – First national Thanksgiving proclamation by the government. George Washington and the Continental Congress designated a day of thanksgiving with the end of the American Revolution and peace.
•    1863 – Abraham Lincoln designates Thanksgiving as the last Thursday of November.
•    1939 – President Franklin D Roosevelt bumps Thanksgiving back a week. North Carolina did not go along with the change, like many states.
•    1941 – The fourth Thursday of November is declared a national day of Thanksgiving by Congress and a federal holiday.

Traditional Thanksgiving Foods from Down South
One of the best parts of celebrating Thanksgiving is savoring the tasty food. Depending on where you live, those dishes can vary. It seems turkey, mashed potatoes, and stuffing are on most menus, but then the favorites can get interesting. Here are five North Carolina inspired holiday dishes:

•    Watergate Salad – So easy to make and so good. It is more dessert than a salad. Pistachio pudding combines with Cool Whip, crushed pineapple, pecans, and marshmallows for melt in your mouth goodness.
•    Cornbread Dressing – Up North, it is known as stuffing, but we call it dressing in NC. We also use cornbread instead of regular breadcrumbs for a genuine taste of the South.
•    Giblet Gravy – Regular gravy is smooth and delicious, but giblet gravy goes a step further. Little bits of the cooked giblets and liver simmer in the gravy and tastes delicious.
•    Sweet Potato Casserole – Nobody grows better sweet potatoes than the folks in North Carolina. No Thanksgiving or Christmas dinner would be complete without this traditional Southern dish.
•    Southern Pecan Pie – While pumpkin pie may rule in many areas, down here, it is pecan pie. Sweet, sugary, pecan goodness that is heaven in a slice.

If you would like to add something unique to your Thanksgiving get-together this year, consider ordering a cake. Food Lion in Advance is taking orders, and you can get different designs, including:

Making Memories
Advance families all celebrate Thanksgiving in slightly different ways. It doesn’t matter how you enjoy the festivities but that you are making memories together. SERVPRO families enjoy getting together and sharing some of our favorite traditions with each other too. Some our favorite things are:

•    Cook Together – From picking the menu to cooking the turkey, we like to share in the making of the meal.
•    Football Fans – Some of us are die-hard football fans and can be found eating leftovers around the TV while watching the game.
•    Making a Wish – The battle for the wishbone can get serious!

Who will find it, and who will get their wish granted by getting the bigger half?
•    Game Time – For many of us, the day is filled with everything from board games to card games with friends and family.
•    Black Friday Shopping – If there is early black Friday shopping, you can bet a large portion of us will head out the doors to hit the bargains.

SERVPRO Proudly Serving the Advance Community
The last thing our Green Team wants is for you to need our water extraction services over the holidays. But if you do have a water intrusion of any size, SERVPRO has a crew ready to go. Our team arrives on the scene as quickly as possible to mitigate the water damage. If the problem arises after regular working hours, it is not a problem. We provide emergency services around the clock. At SERVPRO, we understand disaster does not take a holiday, and neither do we. Our water extraction service includes:

•    Doing a scope of the home and creating a plan of action.
•    Removing standing water and moisture from the area.
•    Drying the residence with industrial equipment.
•    Cleaning and repairing structural elements and content as needed.
•    Restoring things such as flooring, walls, and cabinets.
•    Providing mold remediation if there is a mold problem.
•    Returning your home to preloss condition when possible.

SERVPRO of Davie & Yadkin Counties is a locally owned and operated business. We hope your holiday is stress-free and filled with a wonderful time with your family. If you do need water extraction help, you can contact us at (336) 677-1415. We are licensed and bonded – Contractor Licenses: Residential: NC 26671.

We’re Faster to Any Size Disaster!